Are we moonwalking gender equality? 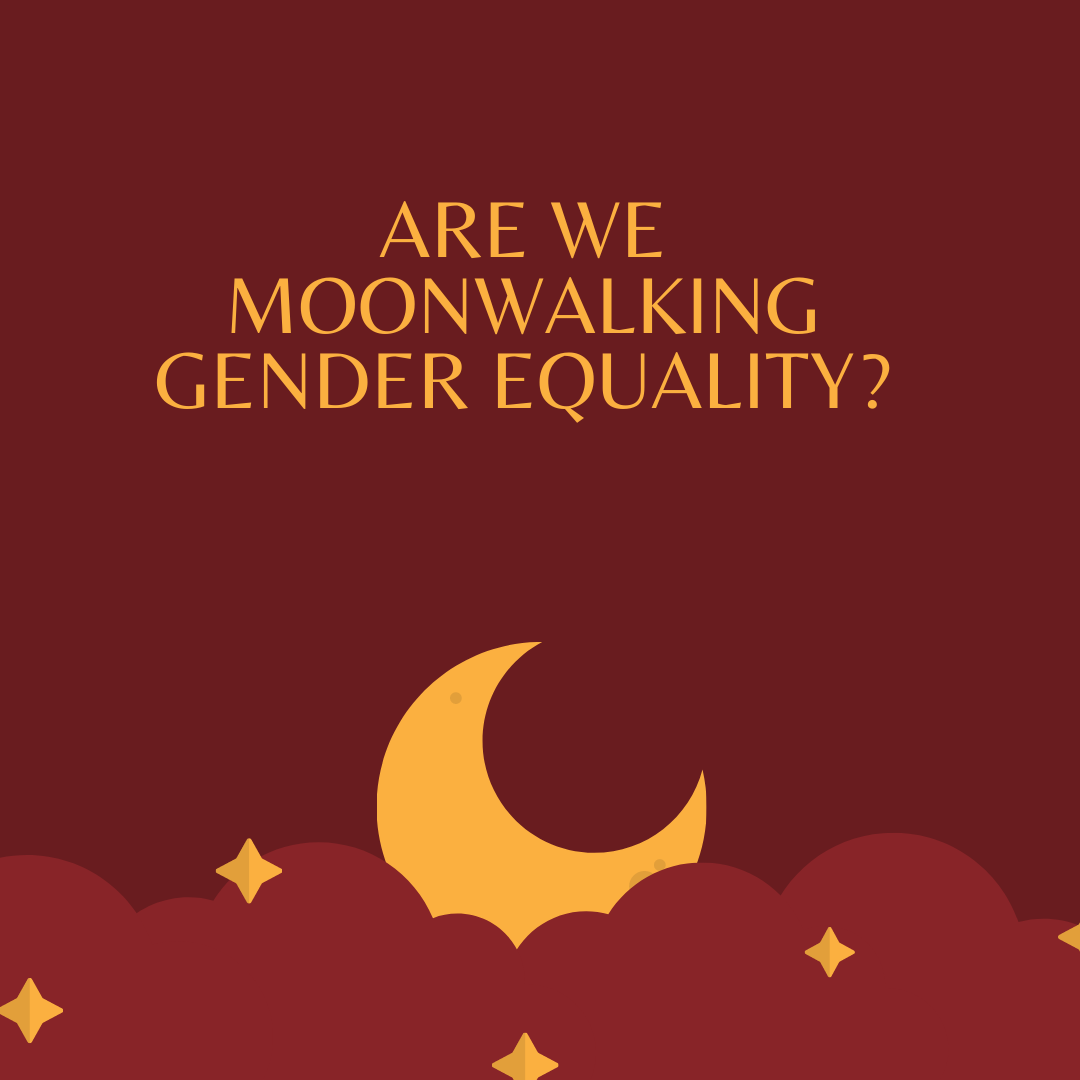 “What if men are, by physiology or temperament, more adapted to exercise authority or to issue command?”

The 100% Project was founded in the aftermath of the Global Financial Crisis. A group of passionate women and men came together to be part of the solution through advocacy and research. Now, a decade after the GFC, standing at the door of the COVID-19 pandemic, we reflect on our journey towards gender equality, bookended by two global catastrophes.

Often, for people who are battling everyday gender stereotypes and casual gender discrimination, it can feel like we are broken records, repeating the same arguments over and over. It can be discouraging and frustrating when we do not seem to be moving forward (and even backsliding according to some statistics!) despite all the effort. As an organisation, the last thing we want is to be doing the same thing over and over and expecting different results. So, while we are continuously pushing ahead with new research, we also want to take stock, evaluate the effectiveness of our approach, and learn from the past.

Personally, we are practically infants on the issue of gender equality, but that doesn’t stop us from climbing onto the shoulders of giants!

Professor Alice Eagly, well-known for her work on gender, stereotyping, leadership, and feminism and her team examined the gender stereotype changes in America between 1946 and 2018. They reported that that “gender stereotypes have changed but the changes are surprising”.

These findings are contrary to the general belief that gender stereotypes have converged and will continue to do so because of the growing similarity in the employment and domestic commitments of women and men. This review demonstrated that, despite the role changes, the stereotypes around women displaying more communal traits have been further reinforced. Additionally, there have been no significant differences to stereotypes regarding agency.

Professor Eagly explained the reason for these stereotypical traits to be sticky is a lack of conscious awareness of occupational segregation. In other words, women tend to work in roles that reinforce communal traits (e.g., healthcare and education). This reinforces the stereotype that women are more communal. Even in male-dominated occupations (e.g., law, engineering), women tend to be placed in roles that reward communal behaviour (e.g., human resources). Meanwhile, men tend to work in roles that reinforce agency (decision-making, assertiveness), even when they may be in female-dominated workspaces (e.g., doctor instead of nurse; principal instead of teacher).

You may be wondering: why haven’t the increased perceptions of women’s competence resulted in increased income for women, or more women in leadership? Professor Eagly and her co-authors hypothesised the reason to be that:

“Agency is lesser ascribed to women and leadership is imbued with agency.”

The two of us were curious to find out if there was some existing evidence to Professor Eagly’s hypothesis and we found another very recent study that asked the question:

“Do gender stereotypes about agency affect how voters judge the governing performance of male and female political leaders?”

Roosmarijn de Geus and colleagues explored this question by comparing the retrospective judgement of voters from America and Australia on the performance of their male and female political leaders (i.e. governors, premiers, and mayors).

The findings are intriguing.

When it came to the retrospective attribution of credit for positive performance, there was no evidence that leaders were judged differently, based on gender, in either Australia or the United States.

The authors theorised that this finding could be explained, at least in part, by the “outsider” or “novice” effect. The American respondents were more willing to give female leaders the benefit of the doubt for negative performance, because the voters considered them to be “novice” and attributed an outsider status to women in U.S. politics.

In Australia, however, voters are relatively more familiar with female political leaders, so female politicians lose their “novelty” status. This explains why there was no evidence of gender stereotyping in voters’ retrospective evaluations of leader performance.

However, the authors acknowledge that these findings do not mean that gender stereotypes are absent in politics. On the contrary, these stereotypes are still manipulated by political leaders to advance their own political goals. The two opening quotes to this article are only a drop in the ocean of gender in politics.

So what? How can we change stereotypes around agency for women?

In writing this piece, we asked the other members of The 100% Project Research Committee to reflect on agency stereotypes for women. Although we do acknowledge that stereotypes around communal traits for both genders are hugely problematic, for this article, we are focusing on agency!

As it stands, it seems that women are judged as having less agency because they have not been often seen in leadership roles. But what can we do about this?

One approach could be to target stereotypes about leaders.

Here are some comments from the Research Committee Members:

“In organisations where leadership stereotypes reward roles/skills where one gender dominates, greater opportunity should be given to the other gender to acquire these skills.”

“Given equality in competence, in senior leadership roles the value of communion should not be underestimated.”

Reflecting on these comments led us to think that perhaps the stereotypes around leaders possessing agentic traits should be targeted. Perhaps instead we should focus on stressing the importance of communal traits in leadership. Then, surely, more women will be able to move into leadership positions?

Unfortunately, there are two glaring problems with this approach.

Second, it downplays agency as an important trait in leadership. There are many agentic traits that leaders must display including decisiveness, ambition and assertiveness.

Another factor detrimental to women pursuing leadership, in addition to Professor Eagly’s hypotheses, is the tendency of people to judge harshly those women who do not portray stereotypically female traits.

“Is there an expectation that we must also like women, and for that to happen they must still fulfil certain stereotypical expectations?”

Women who display agentic traits may still be unsuccessful in pursuing leadership roles because they may be criticised for not conforming to gender stereotypical expectations. At the same time, women who do conform to gender norms, and portray more communal traits, may not succeed in pursuing leadership roles either, as they are judged as lacking agency.

But it’s not all doom and gloom, there is promise that the Mere Exposure Effect may prove useful in shifting agentic stereotypes and reduce harsh judgement of women who display agentic traits. The Mere Exposure Effect stipulates that the longer we are exposed to something, the more we tend to like it. That is, we are more likely to prefer something if we are more familiar with it.

The findings from the study by de Gees and colleagues, discussed earlier, potentially provide proof of the mere exposure effect at work. Voters’ retrospective judgements on the performance of female political leaders were no different to performance judgements of male leaders in Australia, but not the U.S. It is possible that Australian voters did not display gender bias in the judgements of leaders’ performance because they were more familiar with, and thus less repelled by, female leaders.

Put simply, having more women in senior leadership roles will help to change the stereotypes.

How do we achieve that?? Stay tuned for another piece from us!

Please reach out to us if you are keen to be involved in our research, we would love to hear from you!